It was nearing that time in life.  In just a few years, my grandparents would move out of their own home and into an assisted living facility.  To prepare for that major transition, my grandmother had started giving away some of her treasures.

I visited them one summer during this season.  While there, my grandmother asked if I would like to have her dessert china set–one of four sets of china she owned.  I didn’t hesitate to say a quick, and grateful yes. The set originally belonged to her grandmother, which makes it a pretty old set. It is some of the most delicate china I have ever seen.

My grandmother, Nancy as she was known in her adult life, but Annie in her youth, was British.  She was born in England and moved to the States with her family when she was 13.

She was always a very put-together lady, and she thoroughly enjoyed “proper” entertaining, hence the four sets of china 🙂 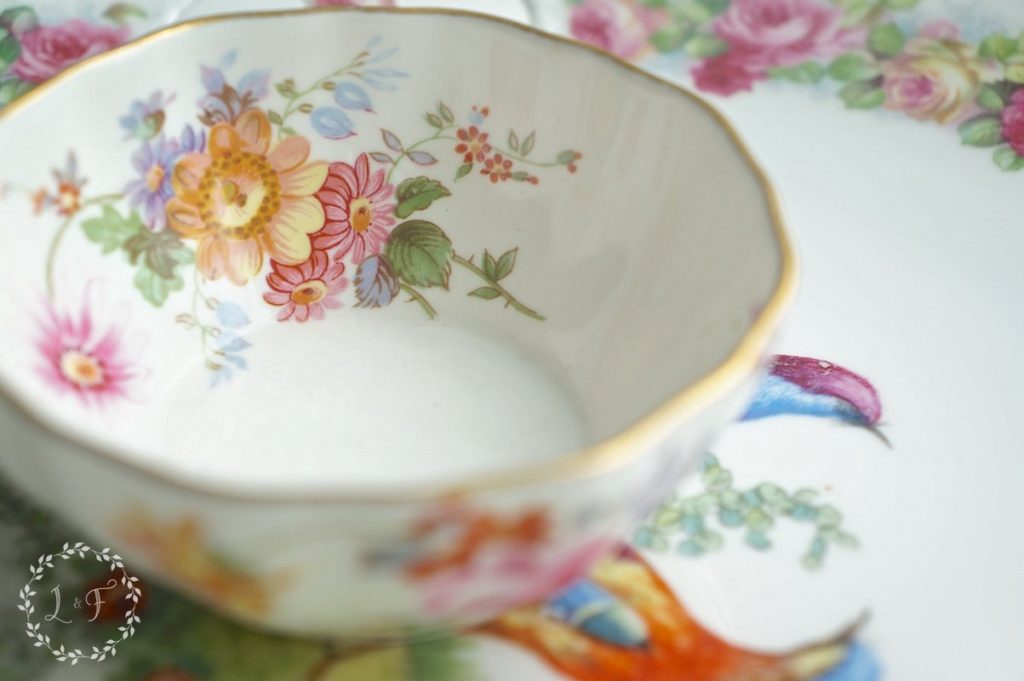 Her British heritage didn’t mean much to me as a kid (except as a reason for annoyance because she always put butter on my sandwiches), but as I grew up and came to love the UK, it has meant more and more to me.  Quite honestly, I wish I knew more about where she grew up and what her life was like. I regret not taking the time to find out more while I had the opportunity.

I feel like this set connects me though to a little bit of that English charm. I had a wonderful place to display the pieces in my first home, but I haven’t had a chance to get it back out until very recently. Back in December I purchased this antique pine cabinet as a Christmas gift for myself, and the dessert china set now has a place to be displayed again.

The motif is birds and flowers, in various shades of deep and pale pink. From what I can tell, the set was made sometime before 1918 in Austria.  I am doubtful it has any amazing retail market value, but to me its priceless. I like to think back to a time when pieces like this were used on a regular basis.  I wonder how many people in my family have taken tea off this set over the past 100 years? The little creamer and sugar bowl are not part of the original set, but were added in sometime later and match quite well. I’ve been able to find replacements for sale online of the Royal Crown “Derby Posies” pattern, but not of the original Victoria pattern. That’s ok though, I doubt I will ever try to add any to the collection.  I love it as it stands and appreciate knowing how many generations of my family it has passed through. Maybe one of my boys will marry a nice young lady, and I can have someone else to pass it on to 🙂

Are there a few special pieces in your life?  Items that hold memories, or that have been passed down through the generations? If so, I would love to have you share about them.

Thank you for letting me share one of mine with you today.

Linking up to:  Wow Us Wednesdays,   Feathered Nest Friday